Well, Let's See How This Goes

Two dear friends of mine have three dogs in their pack, and one of those is a female Jack Russell Terrier.

Those who are familiar need no explanation, but for those who do not know... Female Jacks can get rather aggressive towards other female dogs.

There were visits to the emergency room for stitches, vet bills a plenty, and finally my friends reached their breaking point and accepted that this Jack needed a new home or at some point one of the two dogs would end up dead.

Y'all say hello to Praline. 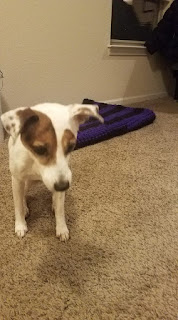 She's got a lot of energy, as Jacks often do, and is rather agile, as Jacks often are.  She's hyper-attentive to her ball, which will come in handy when we start training.  I'm told she goes ape-shit for squirrels and rabbits, which will take some work to temper down.  But for all that, she's affectionate and I can tell she's smart as a whip.

The only thing left to add is that she spent her entire life in Texas.  I picked her up yesterday, and this morning in Fort Collins the thermometer reads a balmy 24 degrees and it is snowing.  Fairly sure she's thinking "What. The. Actual. Hell. Is. THIS?"

We're going to have some fun together when this winter storm passes and I can get her outside for more than a few minutes.  For the time being, we're just getting to know each other.