This past Friday through Monday was spent at Blogorado, the annual gathering of my chosen family in Super Secret Location, Colorado.

The long and short of it is that it is a few days where a handful of gun bloggers, authors, shooters, and the like get together for fellowship, firearms, food, and frivolity.

Some folks got there Thursday, right as a cold front was sweeping down the plains, and there were reports of cold fingers and toes and noses.  Thankfully, our host FarmDad has built a couple "hobo stoves", which consist of a couple old car wheels welded together with a hole cut into the side.  Load up some small to medium pieces of dead tree branches and light a fire, and the end result is a chiminea that radiates heat rather well.  Add a blanket, and sitting in the barn becomes rather tolerable.

I arrived Friday around noon.  We loaded up a flatbed trailer with the target stands, motorized clay pigeon thrower, and some other range gear and headed out to set up the range.  Once that was completed, we returned back to the farm, where we feasted on a hearty meal of German Bratwurst, Bockwurst, hot potato salad, and sauerkraut, courtesy of Bayou Renaissance Man and his wife.

Saturday day was spent turning hard earned money into smoke and noise.  I'd taken my Remington 1100 to the gunsmith this summer to investigate why it wasn't cycling rounds properly -- It will shoot just fine, but won't extract the spent shell, and seems to only go through 90%-ish of the cycle.  Thus, I have to manually eject the spent shell and chamber the next one.  The gunsmith gave it a thorough cleaning, far more so than I can do in my apartment, and this was a chance to test drive it, so to speak.  I found that only a specific load would work correctly: 1250 fps, 1 3/8 ounce cycles fine.  Anything else... 1200 fps 1 ounce fails, 1290 fps 1 ounce fails, etc.  Still and all, the gun swings and shoots like a dream.

After the gun fun was done, it was BACK to the farm, where two of our group honored the rest of us by saying their wedding vows in front of us.  It was a beautiful ceremony, officiated by yet another of our tribe, and I couldn't be happier for them.

We feasted on 1.5 inch thick T-bone steaks cut from a cow we all chipped in to purchase.  This feeds us for the weekend, and provides our hosts with plenty of meat to get them through the next year. Add FarmMom's garlic mashed potatoes to the meal, and it was right tasty.

Sunday was MORE gun range time, after we watched the dismantling of the old barn.  The farm has a barn that is no longer functional, and has been, over the years, slowly falling down.  Despite this, it is rather photogenic, as you can see. 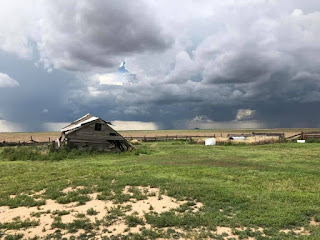 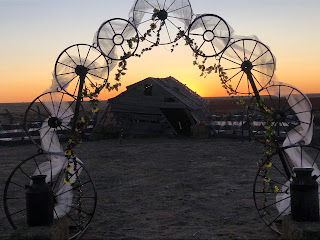 FarmDad propped it up for the wedding, but now that the barn has completed its final task, it was time to pull it down.  Wrap some posts with chain, pull with the truck, and after a couple attempts the barn was on the ground.  Several of us snagged a plank or two, then it was off to the range.

Sunday evening, I made a pot of chili, which was consumed quite rapidly by all.  Even the Texas folks enjoyed it, beans and all, as a proper chili should have.

A couple folks hit the road home on Sunday, but most of us stuck around one last night.  After breakfast on Monday -- we go to a diner in the nearby town and feast on eggs and bacon and such, then leave a huge tip... one of our group will pick up the tab for the entire group, leaving the rest of us to cover the tip, and we do so generously( I noted more than one $20 bill left on the tables) -- we all parted ways.

I was about 5 miles into the drive home when a tire on my pop-up camper pretty well exploded into shreds.  As I was borrowing this camper from a friend, I hadn't really spent time doing any sort of work on it, and it was only when the tire blew that I learned there isn't sufficient space to get a traditional L-shaped tire iron in to get the lug nuts off.  Being as close as I was to the farm, a quick call to FarmMom had help in the form of FarmDad and his work truck (with air compressor and impact wrench) enroute to help.  This, however, took a bit longer than anticipated as FarmDad had a flat tire while coming to help ME with MY flat tire.  What are the odds?

While waiting, three total strangers stopped to offer assistance, ask if I needed anything, etc.  It really hit home how kind and welcoming folks are in this rural area.

Finally the tire on the camper was replaced, both tires checked for proper inflation, and I was on the road.  Five hours later, I was home, dirty, tired, and ready for a shower and a beer.

My soul is at peace, my batteries are recharged, and my heart is full from time spent with my tribe.

Nice recap, and it's CHILI SOUP with the beans in it. And yes, it was good, the few bites I got out of the bottom of the dutch oven. Glad the blowout happened early, rather than late in the trip! Great to see you, and looking forward to next year!